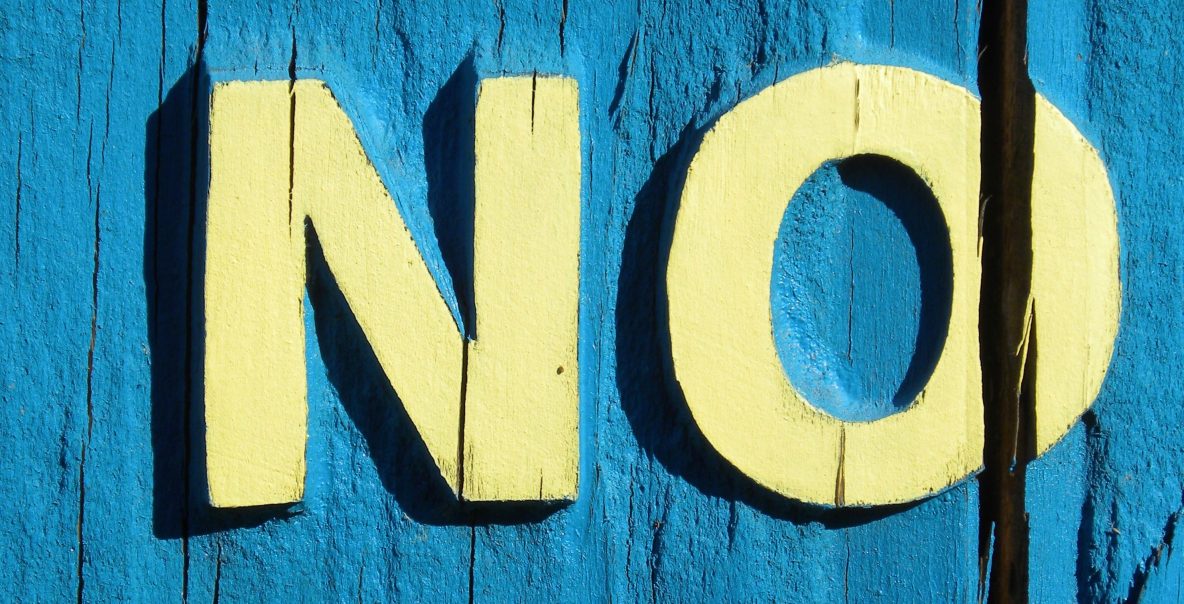 Do you say yes a lot?

Even when you find yourself thinking “no, no, no.”

Do you still usually end up saying yes?

If your answer is yes, you’re not alone. As women, we seem to have this excessive need to be agreeable. To please people. At the expense of ourselves. Click To Tweet

Why do we feel this need to please everyone? To the point where we feel resentful and stressed simply because we say yes when we really just want to say no. We give of ourselves until it feels like we have nothing left to give. And then we give some more.

We say yes when we mean no. And those few times that we do say no, we feel guilty about it for days, even weeks. Setting boundaries is uncomfortable, so we bend ourselves backward to accommodate every person in our lives.

Why You Say Yes

The reason most people say yes when they would rather say no is a fear of rejection. You worry that saying no will disappoint or upset the other person. This may make the person feel angry or hurt. And these negative thoughts or feelings towards you feels like rejection. You fear that this rejection means that you’ll lose the person.

Although the fear of rejection is a big factor, there may be some other reasons why you say yes:

Each and every reason why you say yes when you want to say no is fear-based. Saying yes has been ingrained in us. Specifically in women. And it takes immense strength and courage to learn how to say no. A helpful way to think about saying no is that you’re setting healthy boundaries.

Saying no doesn’t mean that you’re a selfish person. It means that you know your own value. This is a healthy way to set boundaries. Being able to say no gives you more control over your personal time and energy.

The truth is, you can be compassionate, kind, reliable, and respected without saying yes to every request that comes your way.

People will respect you even more for setting healthy boundaries. At least they should. And if they don’t, then you need to learn how to tolerate or detach from their negative reactions. Usually, it has nothing to do with you saying no and everything to do with their own sense of frustration. Often, people will be upset because they expect you to say yes to all their requests; especially if you have been a people pleaser for a long time. It’s likely that a no from you will be unexpected which may cause a negative reaction. Don’t allow this to sway your decision.

Here are some ways to stop saying yes when you want to say no:

It’s important to be a person of your word and honor your commitments. But up until what point? Where do you draw the line? When do you say no more? That’s why it’s even more important to honor and value yourself. Will saying yes conflict or align with your own priorities and goals? The answer to this question should determine your answer to the request being made. Sometimes enough is enough and you simply need to give yourself a break. You deserve it.

Keep Your Time in Mind

The reason why saying yes can be such a burden is because we have limited time each day. If you say yes to every request, then it intrudes on your time. This can be difficult to manage, especially if you already have a full load of tasks to complete. Ask yourself if you really have the time to complete this additional task. Also, whether doing it will make you feel uncomfortable or resentful. If you don’t have the time and it will make you resentful, your answer should be no. On the other hand, if you have the time and the task will be rewarding, you can say yes. The choice is yours but it is a choice.

No is a full sentence. End of story. It doesn’t require an explanation. You don’t have to give reasons why you can’t do it. There is absolutely no reason to defend yourself or justify your decision. You also shouldn’t feel the need to apologize for saying no. I know you feel uncomfortable and have an urge just to say yes but you are allowed to say no without explaining yourself. The more you try to explain yourself or give reasons, the more likely you are to go back on your decision and end up saying yes. Rather, say no politely but with conviction. People will understand and respect your decision.

No can also mean not right now. And that’s perfectly fine. Just because you can’t assist someone immediately doesn’t mean you can’t help them at all. You have the right to think about your answer, weigh the consequences and answer them at a later stage. Don’t allow yourself to be pressured into saying yes now when you can’t do something right now. Instead, say “no, please let me think about it”. This gives you time to consider how it would affect you and leaves space for you to say yes later on. Plus, you get some much-needed practice saying no.

Saying no is about learning to put yourself first. As a wife, a mom, a daughter, a sister you’ve probably spent a lot of time putting others first. Although there is nothing wrong with caring for others, you need to care for yourself too. Saying no is a form of self-care. It helps to keep your to-do list simple and create more space in your life. If you say yes when you want to say no, you create unnecessary stress for yourself. So, practice saying no as a way of taking care of yourself. Remember, you can’t pour from an empty cup. Refill your own cup by setting boundaries so that you can more easily give to others.

Tips for Saying No

If you often find yourself saying yes simply because you don’t know how to say no, then you might need some guidance. The way you say no makes all the difference. Use these tips to boost your confidence:

Polite Ways to Say No

If you’re still feeling apprehensive about saying no after reading these tips, then you may need some help with wording. The way you phrase saying no is important. You need to be polite yet firm about your decision.

Here are some polite ways to say no to something clearly, without apologizing or explaining yourself:

All of these are acceptable ways to say no. Combine these ideas with the tips I shared if you need some extra help.

But still, you end up saying yes to something like this:

Example 1: Saying yes to being on the PTA for both your kid’s classes even though you have a newborn baby to care for and no help at home.

Example 2: Agreeing to host a party even though you’re low on funds and struggling financially.

Example 3: Having weekend guests when you’re exhausted and need time to relax or take care of responsibilities that need your attention.

Afterward, you think to yourself… “Am I out of my mind? Who am I kidding? I don’t have the time/energy/funds for this.”

Allow this guide to empower you. Next time you find yourself feeling like you should say yes, you’ll be able to say no with confidence.

This is the ultimate form of self-care. Saying no means that you have enough self-wroth to respect your own precious time and energy.

Say yes to the requests that feel right and that you want to say yes to but say no to the things that just aren’t acceptable.

Do you have trouble saying no?

What to Do When People Behave Badly